In shocking news today, TV actress Manisha Yadav, who is best known for her role of Saleema Begum in the hit TV show Jodhaa Akbar, has passed away. Reports have surfaced saying that the actress suffered from a brain haemorrhage and passed away on Friday, 1st October 2021. Her co-star Paridhi Sharma had consoled her demise on the same day when she learned about it. “This news is so heartbreaking. RIP @manisha_mannu,” Paridhi had written while sharing her picture in her Instagram stories. Check it out below: Also Read – When Sonu Sood reminded Aishwarya Rai Bachchan of Amitabh Bachchan while working in Jodhaa Akbar; here’s what happened 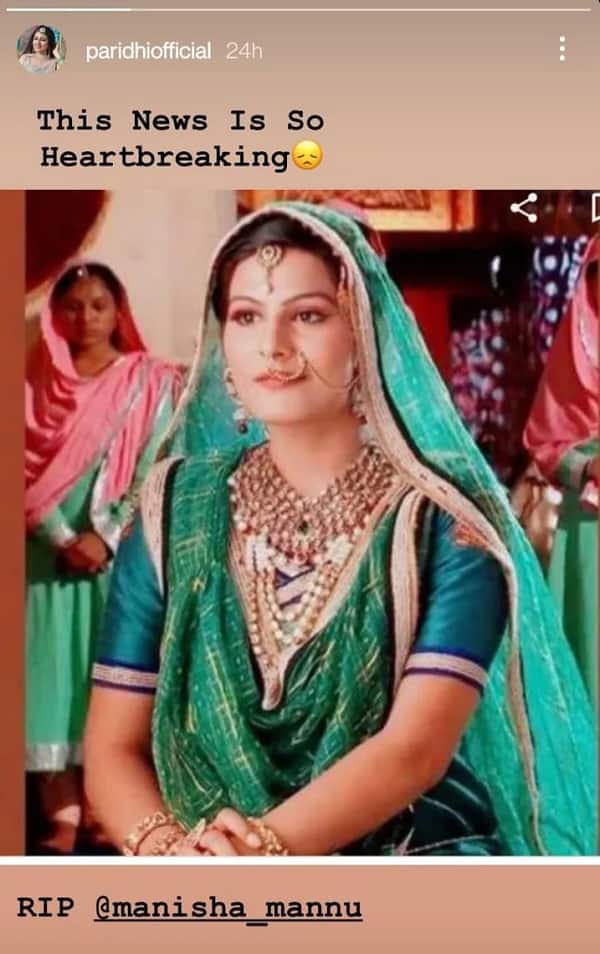 While talking to ETimes, Paridhi revealed how she learned about her demise. The Chikoo Ki Mummy Durr Kei actress revealed that they were a part of a WhatsApp group. The group also includes other actors from the TV show. Paridhi added that every celeb associated with the show would send every important update about their lives in the group and that’s how they stayed in touch. She learned about the same yesterday and was shocked. Paridhi spoke at length about Manisha as a co-star. She revealed that Manisha has a one-year-old toddler. “Her energy was always high and she was a chirpy person. We had a great time shooting together for the show. I remember she was always full of life. Hearing about her death is really saddening for me and what’s even more bothering is that she has a one-year-old baby. My heart goes out to her family,” the Patiala Babes actress told the portal. Also Read – OMG! Taarak Mehta Ka Ooltah Chashmah actress Disha Vakani has acted in several films including a B-Grade movie – here’s the list

Manisha Yadav was quite active on Instagram. She would share posts, reel videos that were funny, entertaining and impressive too. She would often post pictures and videos with her baby. Her baby boy, Tushan, turned one just this July.

May her soul rest in peace. May God give strength to her family and especially the little one.