Aryan Khan has finally been granted bail. This means that he will walk home from jail tomorrow. Shah Rukh Khan and wife Gauri can finally spend a night sleeping somewhat peacefully. He has already spent more than 25 days in judicial custody. Aryan Khan and his friend Arbaaz Seth Merchant along with Munmun Dhamecha were in the custody of the NCB from October 2, 2o21. Now, Shah Rukh Khan’s manager Pooja Dadlani has thanked fans on her Insta stories. Her name has come up in the case time and again. She posted on social media, “There is a God…Thank you everyone for your love and prayers. Truth prevails.” Pooja Dadlani was present for both the hearings of Aryan Khan and the accused in the lower courts. Also Read – Aryan Khan Case: Shah Rukh Khan and Gauri staying at a South Mumbai hotel? Star couple combing through formalities and conditions to get son home 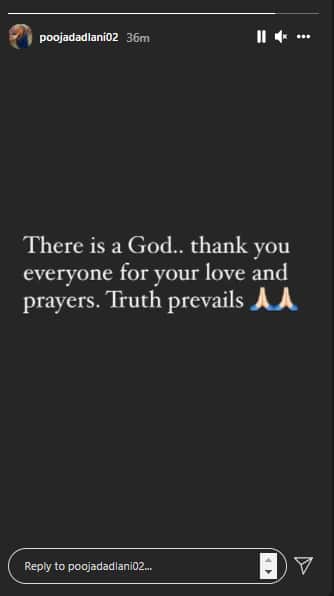 The name of Pooja Dadlani has come up many times in the case. Prabhakar Sail, the independent witness has alleged that he heard KP Gosavi and Sam D’Souza talking to a woman who was presumably Pooja Dadlani about a pay-off to the tune of Rs 25 crores. He also said that they allegedly discussed paying Rs 8 crore to Sameer Wankhede. This led to the investigation of the corruption and extortion charges on Wankhede. NCP minister Nawab Malik has been at the forefront calling out the agency for witch-hunt. Also Read – Aryan Khan granted bail: Lawyer Satish Maneshinde’s first reaction will resonate with all Shah Rukh Khan fans and supporters

Yesterday, some reports also said that some ethical hacker was asked to check some CDR records and one of them was that of Pooja Dadlani. She is Shah Rukh Khan’s manager since a long time and very close to the family. His other friends have said that though Shah Rukh Khan has been a busy superstar he was always a hands-on father with his kids and their education. They say he always made time for his children.

It is surely huge relief for fans who have been sending in prayers from all over the globe.