Legend Mike Tyson is making his Bollywood debut with the most anticipated Pan India sports action film Liger which stars Vijay Deverakonda in the lead role. The unbeatable icon, known for his intimidating ferocious demeanor will be seen playing a significant role in the film. The big day has arrived and the team is currently in the USA to shoot the crucial sequences involving Legend Mike Tyson and Liger Vijay Deverakonda. The shooting schedule has begun today and they are grandly canning these important scenes. The poster shows the candid moment of Tyson and Vijay. They two are seen all smiles in the picture. They will be playing intense roles on-screen and their characters will set the screens on fire. Also Read – Liger actress Ananya Panday shares a positive video of ‘rainbow after rain’ after being embroiled in Aryan Khan drugs case – Watch

“And then they met- face to face! Absolute fire ?The Legend vs Liger ?? #Liger #USAscheduleBegins ? @MikeTyson @TheDeverakonda #PuriJagannadh @karanjohar @ananyapandayy @Charmmeofficial @apoorvamehta18 @DharmaMovies @PuriConnects @IamVishuReddy, ” reads the statement of the team. Liger will also feature numerous foreign fighters. In association with Puri connects, the film is being produced jointly by Bollywood’s leading production house Dharma Productions. The film in the crazy combination has cinematography handled by Vishnu Sarma, while Kecha from Thailand is the stunt director. Also Read – Ananya Panday’s cousin Alanna gets engaged to boyfriend Ivor McCray, Bipasha Basu, Lara Dutta and others attend the party – view inside pics 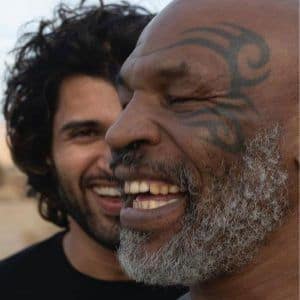 Also Read – Children’s Day 2021: 27 UNSEEN and RARE childhood pictures of Bollywood celebrities will bring a smile to your face! Can you guess who these cuties are?

A couple of weeks back, we told you that since Mike Tyson was brought on board, the dynamics of the entire project was changed drastically. According to the reports, Puri and Karan are under pressure to wrap up the film quickly. There are rumours that the two are quoting a high amount for the rights of the film.

Helmed by director Puri Jagannadh, the movie also stars Ramya Krishnan and Ronit Roy playing prominent roles. Puri Jagannadh, Charmme Kaur, Karan Johar, and Apoorva Mehta together are bankrolling the film. The movie is being made in Hindi, Telugu, Tamil, Kannada, and Malayalam languages. Currently, the most awaited film Liger is in the last leg of shooting and the makers are planning to release the movie in the first half of 2022.

Actor Vijay has also started dubbing for his part in Hindi and had even taken Hindi classes. On the work front, Vijay will be seen in romancing Ananya in this film.